Via war and piece och BBC 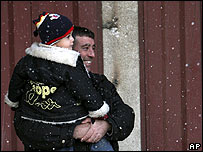 Snow Falls in Baghdad. From the AP:

After
weathering nearly five years of war, Baghdad residents thought they’d
pretty much seen it all. But Friday morning, as muezzins were calling
the faithful to prayer, the people here awoke to something certifiably
new.

For the first time in memory, snow fell across Baghdad.

Although the white flakes quickly dissolved into gray puddles, they
brought an emotion rarely expressed in this desert capital snarled by
army checkpoints, divided by concrete walls and ravaged by sectarian
killings – delight.

”For the first time in my life I saw a snow-rain like this falling
in Baghdad,” said Mohammed Abdul-Hussein, a 63-year-old retiree from
the New Baghdad area.

”When I was young, I heard from my father that such rain had fallen
in the early ’40s on the outskirts of northern Baghdad,” Abdul-Hussein
said, referring to snow as a type of rain. ”But snow falling in Baghdad
in such a magnificent scene was beyond my imagination.”

Morning temperatures uncharacteristically hovered around freezing,
and the Baghdad airport was closed because of poor visibility. Snow is
common in the mountainous Kurdish areas of northern Iraq, but residents
of the capital and surrounding areas could remember just hail.

”I asked my mother, who is 80, whether she’d ever seen snow in Iraq
before, and her answer was no,” said Fawzi Karim, a 40-year-old father
of five who runs a small restaurant in Hawr Rajab, a village six miles
southeast of Baghdad.

A blogger and general internet nerd from Sweden. I write about politics, internet, technology, the world around me and whatever else interest me. I write mostly in swedish but some english.
Visa alla inlägg av Claes →
Det här inlägget postades i Diverse. Bokmärk permalänken.