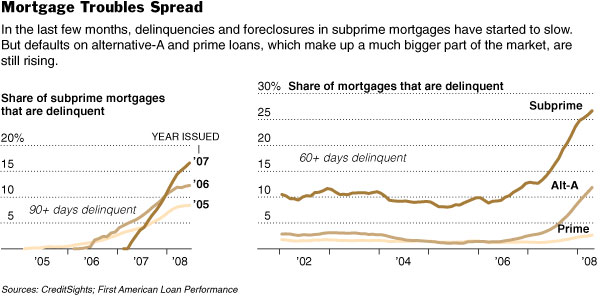 Housing Lenders Fear Bigger Wave of Loan Defaults – NYTimes.com
Homeowners with good credit are falling behind on their payments in growing numbers, even as the problems with mortgages made to people with weak, or subprime, credit are showing their first, tentative signs of leveling off after two years of spiraling defaults.

The percentage of mortgages in arrears in the category of loans one rung above subprime, so-called alternative-A mortgages, quadrupled to 12 percent in April from a year earlier. Delinquencies among prime loans, which account for most of the $12 trillion market, doubled to 2.7 percent in that time.

The mortgage troubles have been exacerbated by an economy that is still struggling. Reports last week showed another drop in home prices, slower-than-expected economic growth and a huge loss at General Motors. On Friday, the Labor Department reported that the unemployment rate in July climbed to a four-year high.

While it is difficult to draw precise parallels among various segments of the mortgage market, the arc of the crisis in subprime loans suggests that the problems in the broader market may not peak for another year or two, analysts said.

Defaults are likely to accelerate because many homeowners’ monthly payments are rising rapidly. The higher bills come as home prices continue to decline and banks tighten their lending standards, making it harder for people to refinance loans or sell their homes. Of particular concern are “alt-A” loans, many of which were made to people with good credit scores without proof of their income or assets.

“Subprime was the tip of the iceberg,” said Thomas H. Atteberry, president of First Pacific Advisors, a investment firm in Los Angeles that trades mortgage securities. “Prime will be far bigger in its impact.”

A blogger and general internet nerd from Sweden. I write about politics, internet, technology, the world around me and whatever else interest me. I write mostly in swedish but some english.
Visa alla inlägg av Claes →
Det här inlägget postades i Ekonomi och har märkts med etiketterna Ekonomi. bolån, USA. Bokmärk permalänken.